This is a submission to Game Off 2020

View the submission page for this entry

A downloadable game for Windows, macOS, and Linux

For millennia, the elves of Novalunis have defended the ancient Lunar Bastions. At the heart of each bastion lies a Moonstone, said to be fallen pieces of the Moon herself. Their long-term proximity to the Moonstones has given them the ability to harness lunar powers.

The odds of winning this war are less than the chance of landing an arrow on the moon, but you must fight to the very last to defend your bastion.

Your objective is to defend the Lunar Bastion against the endless forces of the Solarine Empire. Though you do not believe you can withstand them forever, you must last for as long as you possibly can.

This is designed as a multiplayer game, where you must work as a team with your fellow players. A singleplayer option is also available, but the game isn't really balanced around that. Of course, if the server crashes, you won't have a choice.

Upon joining the game, you can choose between being either a Warrior or an Archer, each of which has unique abilities. Descriptions of your abilities, and other various things, can be found in tooltips during the game.

The game also works reasonably well with a controller, although various menu options must be accessed with the mouse.

This game takes a fairly loose interpretation of the theme "Moonshot", primarily focusing on the provided definition of moonshot thinking: "a type of thinking that aims to achieve something that is generally believed to be impossible". Given it is a multiplayer game, it is also a fairly ambitious project, though that use of the term feels a bit like cheating. There are also many moon themes, including an ability called Moonshot. (of course!) 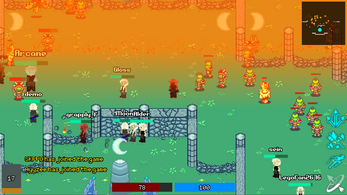 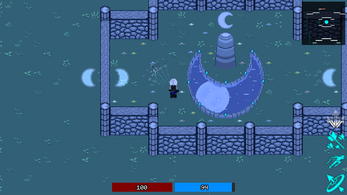 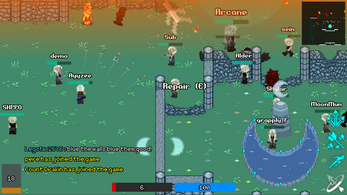